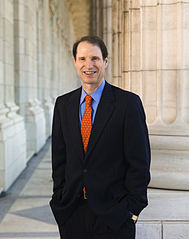 Oregon Senator Ron Wyden is one of the bravest men in the world.  In April of 2012, he went to Fukushima, Japan, to see for himself what was going on with the damaged nuclear reactors.  Then, again showing great bravery, he issued a press release and asked for action to reduce the danger.

If he runs for president, I will vote for him based on his bravery and honesty.